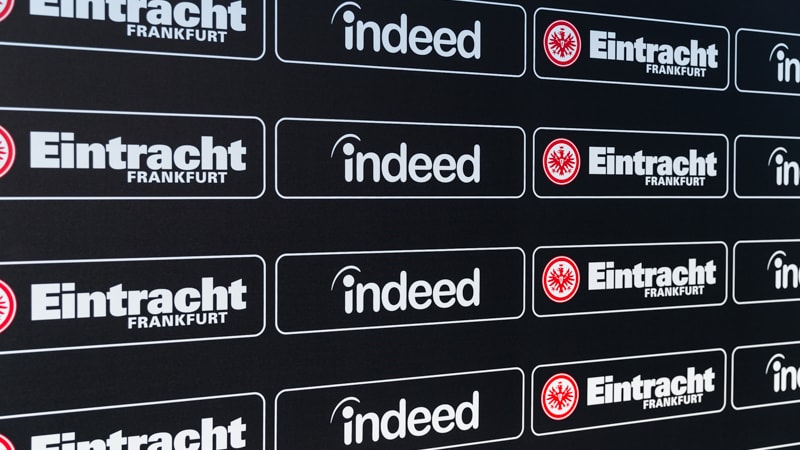 The online job search engine “Indeed” becomes the new main sponsor of the Frankfurt Eintracht . I realized the press conference on Friday, 23.06.2017 as press photographer for my client Hill+Knowlton Strategies. In this article I describe the challenges and requirements of this assignment and how I implemented the theme.

The customer requirement was to document a complete press conference and provide all images, image rights also for further use such as social media strategies. Both the presentation and the statements of the managing director of Indeed Mr. Hensgens , the presentation of the new jerseys and other impressions on the football field following the press conference should be implemented promptly.

All pictures were handed over to my client on site after the press conference. I was on site early and was also able to go through the trial runs of the technology and create the first “test photos” (alignment of light, stage design, color temperature).

Features of a press photographer

Certainly, it is important that the images are available immediately afterwards, so speed is also a criterion in the cooperation for many clients.

But how do the photographers differ, who all create similar image sequences on location for different media ?

For me as a photographer, it’s also about implementing new image ideas quickly on set. This requires, in addition to speed of image implementation, to use his “creativity” in such a way that different motifs are recorded on the spot.

So I also asked the three Eintracht models in the new jerseys to sit down and strike a pose other than the upright standing position. My idea was then also immediately taken up by all the other photographers and I see that the images were then also used in the media landscape.

After the press conference was finished with the interviews of Mr. Hellmann (CEO Eintracht Frankfurt) and Mr. Hensgens (Managing Director Indeed), the new company jerseys were presented. Finally, there was a group photo inside in front of a logo wall.

The day was then concluded outside on the soccer field by once again providing a logo wall. On the pitch outside, more photos were then taken in front of the logo wall, this time including the U12 school team from Eintracht Frankfurt.

Vanessa Klich plays in the 1st women’s team in the right midfield with the playing number 7 and has been with Eintracht Frankfurt since 2015. She is not only an excellent soccer player but also an extremely sympathetic, friendly and attractive representative of the club. So, away from the hustle and bustle, I asked you to take a few shots on the field right away. Here, too, it is a matter of establishing a good partnership in the communication between the athlete and the photographer. Furthermore, it is also a question here of maintaining the “arc of suspense”, communicating with the person to be recorded so that all the pictures are quickly in the can. Speed and communication are important in that other photographers on set also want to pick up ideas and likewise implement your photo theme.

Since I was able to talk to Bernd Hölzenbein before the press conference, there was also a nice photo opportunity with him talking to the managing director of Indeed. The standard photo of the photographers in front of the logo wall was a handshake photo of the two. I thought of another new scene and asked them to include a quickly organized football.

A final photo with me as a press photographer and a small souvenir had to be. Finally, the opportunity arose spontaneously to take a souvenir photo with the new football shirt with the board Mr. Axel Hellmann. Great that he spontaneously joined in and I could capture this photo.

For the picture selection and preparation I needed another 1 hour, afterwards I could already hand over 40 processed pictures, in the course of the day still further pictures were added by me to a picture gallery.

Background information on the cooperation between Indeed and Eintracht Frankfurt

The contract with the global company will initially run for three years and will also adorn the chest of the new jerseys.

Indeed is represented on the Internet with websites in over 60 countries and is present in 28 different languages. Indeed has been active in Germany since 2012. The new sponsor will not only sponsor Eintracht’s professional team, but rather all of the U-teams of the junior training center and the women’s and girls’ teams of the Eagle Bearers. A strong partner has been found in Indeed, which will also raise the profile on an international level and especially in the United States.
“Indeed has a clear mission: We help people get jobs.

For us as a company, success means successfully placing millions of job seekers. When selecting a partner in German soccer, it was important for us to find a club that shares both our ambition for success and our focus on innovation. Eintracht is therefore the ideal partner for Indeed: the club combines its long tradition with a clear vision for the future. We are also impressed by Eintracht’s extremely passionate and loyal fan base, which is also constantly growing internationally. We are therefore delighted to be accompanying Eintracht on its journey in the Bundesliga with immediate effect. I personally had the opportunity to experience the great enthusiasm of the club and the fans at the cup final first hand,” says Frank Hensgens, Managing Director of Indeed in Germany.

Was also shown as a player of the press conference, as I find a super awesome video about the traditional club Eintracht Frankfurt
https://www.youtube.com/watch?v=knHDA7B4lt4